Tennesseans Say Not In Our State: Stop the Hate

On October 28th, Murfreesboro and Shelbyville Tennessee will be the site of white supremacist and nazi rallies and actions. Although now billed as "White Lives Matter," the rallies were originally titled Unite the Right 2.0, a reference to the Charlottesville, Virginia rally in August that left young activist Heather Heyer dead. Middle Tennesseans have come together in an extraordinary display of unity around ideas of diversity, equality, and human rights. Here's a schedule of events with links to details. 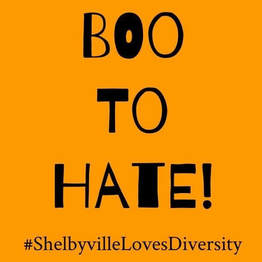 SHARE AND INVITE FAR AND WIDE!! The local Bedford County and Shelbyville community is developing counter actions around #Boo2Hate please share hashtag and use the solidarity photo.

The racist fear groups will be demonstrating on the sidewalks of Shelbyville at 10am. We are asking folks to arrive at the counter protest space at 9am.  ttp://notinourstate.weebly.com/safety.html

In an effort to provide a safer space for community members who are direct targets of white supremacist hate speech and action, and to come together as proud anti racist Tennesseans, an event to amplify pro diversity and pro equality ideals is also being organized at a separate location away from the white supremacist rally. Details are developing and we will update again soon. This event page is a SAVE THE DATE providing actual local history and the logic of counter protesting. Contact TN Anti Racist Network at notinourstate@gmail.com. Contact Statewide Organizing for Community eMpowerment (SOCM) at info@socm.org. Contact Women's March Tennessee at tennessee@womensmarch.com. Contact via FB: SURJ Nashville, Vets For Peace Nashville; Bedford County Democratic Party; Mercy Junction Justice and Peace Center; Tennessee Activist Coalition. Join Us!​

"Shelbyville Tennessee, better known as "little Boston" was a hotbed of Unionist sentiment throughout the civil war. When William Rosecrans' Union Army captured the town, they were welcomed as liberators, and locals held a July 4 celebration as the confederates retreated to Chattanooga." ​

League of the South, one of the more prominent and easy-to-identify violent white supremacist groups involved in the deadly white nationalist riot in Charlottesville, Va., is funded through a Tennessee-based nonprofit, the Mary Noel Kershaw Foundation.

The MNK Foundation President, David O. Jones, of Lobelville, Tenn., is also founder and director of Heritage Covenant Schools. The MNK Foundation's Secretary is J. Michael Hill of Killen, Ala. Hill is also the leader of League of the South, designated a racist hate group by Southern Poverty Law Center.

The charity is funded by several prominent Nashville residents as well as other people throughout the region as is detailed in their 2016 tax return, found at https://tinyurl.com/y75435z5. These donors include Robert Echols, a Nashville attorney and former federal judge; John Dayani, a healthcare executive and political donor; and Steve Hewlett, a Nashville developer whose firm, Hewlett Spencer, has built several Tennessee public schools.

Of particular concern is the web of connections between those who financially support white supremacist hate groups and also financially support elected officials. For example, in addition to financially supporting League of the South's paramilitary training for racists, Mr. Echols also contributed $5,500.00 to Beth Harwell's PAC and legislative campaign. Harwell is the Republican Speaker of the House in the Tennessee House of Representatives and recently announced her intent to run for Tennessee governor.

Regardless of political affiliation, the Tennessee Anti-Racist Network takes the position that elected officials should not accept donations from those associated with and providing financial support to violent hate groups.

In addition to funding more than $5,000 in paramilitary training for white supremacist groups, the charity also uses funds to develop a "History of the Southern People" class for Heritage Covenant Schools, a nonaccredited Tennessee home school collective.

Tennessee Anti Racist Network calls on all Foundation funders to cease their association and funding of the Mary Noel Kershaw Foundation, which exists explicitly to promote armed and unarmed combat training for the violent hate group League of the South. We call on elected officials to carefully examine the relationships between their donors and white supremacist/nationalist groups and reject any donations tainted by hate group connections.

TARN calls on our members and allies to hold their elected officials and prominent Tennesseans accountable and demand they cease their support of this racist charity engaged in paramilitary training of the next generation of violent racists and neo-Nazis. TARN calls on all Tennesseans to demand that elected officials end implicit support and connections to white supremacist organizations.

For the sixth consecutive year, an annual extremist and white supremacist conference sponsored by American Renaissance (AmRen) will be held in Middle Tennessee’s Montgomery Bell State Park.  A group of community organizers, activists, and advocates are hosting a counter-event: a protest and teach-in challenging white supremacy and promoting equality and diversity. A recognized hate group by the Southern Poverty Law Center, American Renaissance (“AmRen”) “is a self-styled think tank that promotes pseudo-scientific studies and research that purports to show the inferiority of blacks to whites,” according to the SPLC which tracks the nation’s extremist hate groups. AmRen’s international conference is meant to provide an open space for “intellectuals,” Neo-Nazis and other racists to collaborate and refine their agenda.

The counter-event, “Not in Our State: Oppose the Hate!” billed as “a grassroots effort to confront white supremacy and hate,” will take place from 10:00 a.m. to 3 p.m. on July 29, outside the Montgomery Bell State Park Conference Center (near the playground near the park inn), outside Dickson, Tenn. “Oppose the Hate!” will directly challenge AmRen’s racist ideology by presenting a series of speakers, entertainers and community members to expose these 21st-century racists.

“AmRen is simply white supremacists in business suits,” said conference organizer Sallie Neal from Murfreesboro. “This group is concerning because they advocate an agenda of eugenics and superiority whitewashed with what they call ‘science.’ We want to send a message to the public that Tennessee is more tolerant than this, and that Tennesseans should reject AmRen's efforts to make Tennessee a hate tourist destination. White supremacist organizing has no place in our modern State.” AmRen previously hosted their annual conferences in elaborate hotel conference centers, but after community outrage pressured hotel managers and local leaders to preemptively cancel their reservations, the racist group has retreated to the seclusion of Montgomery Bell State Park’s conference center.

AmRen’s conference in Middle Tennessee comes amid on the heels of a shocking increase in the number of race- and nationality-motivated attacks in the country, spurred on by racists enjoying the bully pulpit of the Trump Administration, which has been reluctant to criticize Klan members and other white supremacists such as David Duke. Trump’s rise to the presidency has drawn what were previously outcasts of the far right into the political mainstream.

Richard Spencer, a longtime white supremacist and leader of a white nationalist, anti-black think tank concerned with preserving the “white race” and defeating multiculturalism and ending immigration of non-whites, is rumored to be a headline speaker at this year’s AmRen conference in Tennessee. Spencer’s group and AmRen have repeatedly called for the end of marriages between white Europeans and what they perceive to be “non-whites” who never belonged to American society.

Spencer, who is said to have coined the term “alt-right,” quoted Nazi propaganda, refused to denounce Adolf Hitler, and railed against Jews after the 2016 election. In a Nov. 20, 2016 story, The New York Times reported that Spencer’s followers gave the Nazi “sieg hiel” (“hail victory” in German) salute after a speech by Spencer in which he proclaimed, “Hail Trump! Hail our people! Hail victory!” Stephen Bannon, an alt-right opinion and gossip publisher, is now a chief adviser and strategist to the Trump White House.

“AmRen is worrisome because it attempts to pass off its racist message as serious public-policy work, which it isn’t,” said Will York, Nashville attorney and teach-in speaker. “What’s promising about this protest and teach-in is the opportunity to expose AmRen’s ideas to the light of day. There is wisdom in Justice Brandeis’ statement that sunlight is the best disinfectant. The answer to speech hostile to our values as Tennesseans is speech that embraces inclusiveness and racial equality.” Academics and advocates have signed on to make presentations at the teach-in, covering topics ranging from race and the death penalty to state efforts to criminalize immigrants to transphobia.

The counter-event organizers stressed the “nontraditional” character of the protest and teach-in.  “We don’t want this to be a dry presentation of research on a Saturday afternoon,” Neal said. “We want people to come out and enjoy our tax-payer-funded State Park and take a stand against racism in the process.”

Pro-Equality organizers of this event are also urging individuals and organizations to sign a “statement of solidarity and support” affirming Tennessee as a place of tolerance. “We are disgusted that (AmRen) would use our taxpayer-funded parks to (mis)educate on the superiority of the White race,” a portion of the statement reads. “Oppose the Hate!” is free to attend. The group has obtained a special use permit for an area near the conference center, where speakers, teach-ins, and lunch will be served. This area is noted on the attached map. In addition, protesters from various groups will gather directly in front of the conference center on Friday, July 28 at 4 p.m., and Saturday, July 29, from 10:30 a.m. – 3:00 p.m. for peaceful and visible anti-racism protest.